The winding of an electrical machine can be split into a certain number of parallel paths in order to adjust the voltage and current ratings to those of a specific supply.

Fig. 1. shows two different ways in order to change a winding where all coil are connected in series to a winding layout with two parallel paths. When splitting up the phase windings into parallel paths, make sure that the different paths are identical (equal number of turns, equal resistance, exposed to equal flux in any rotor position, etc.) in order to avoid undesirable imbalances. Using the second approach (Fig. 1 bottom), any number of parallel paths can be achieved that are feasible from a practical point of view. 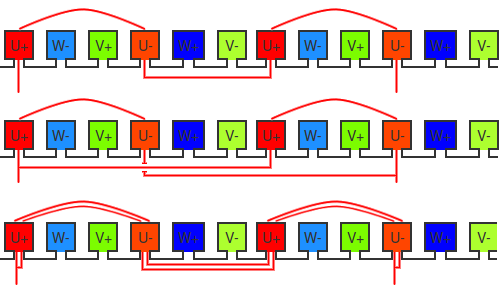 Read about another glossary term